The video shows a leading implantologist from Chandigarh discussing the world-renowned brands in implant dentistry. Used exclusively at his implant dentistry clinic in Chandigarh, the quality of these brands is made available at fraction of the cost.

In another video, the doctor shares the cost advantage of full mouth restoration in India.

Narration – “Most of the dental implants that we use are of international quality.

The primary implant system we use is Nobel Biocare and Ankylos and in addition, we have used 3i implants and Uniti as well.

They’re both international brands and none of them is made here in India, like Nobel Biocare is made either in Sweden or in the U.S.

Ankylos is primarily manufactured in the U.S. and Uniti is Netherlands-based company which gets imported from there.

Lab work is done by one of the most reputed labs in Delhi.

It’s an accredited lab, they have an ISO certification as well, they have a good turnaround time also if you need something done in a hurry, they always accommodate your requests…

People who want something in short time, it’s possible for us to do that as well.

Office where I was working in the U.S., they were using Zimmer systems, so I use Zimmer in U.S.

But in India, I have used Zimmer here also but primarily I use Nobel Biocare and Ankylos here.

I would say it’s almost one-sixth of…but the quality of care, quality of work done, all materials used, are more or less the same.

I don’t think there’s any difference.

Why pay six times more in the U.S. when you can get similar quality by leveraging dental tourism in India? 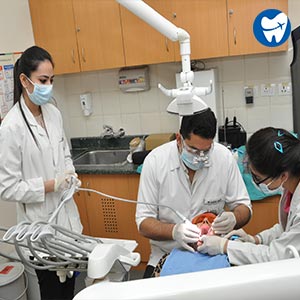